skip to main | skip to sidebar

There was an interesting article in Slate ("Organic Panic") a few weeks back on how the Obamas vegetable garden makes some conventional farmers squeamish. Apparently Michelle Obama's statements supporting local food and organic farming are a little too tough for some big growers to handle. My favorite quote in the article is this:

"It's a charming idea and everything, but it's not practical," says Xavier Equihua, who represents the Chilean Exporters Association as well as the Chilean Avocado Committee. The main problem, he says, is that local food is seasonal. For example, avocadoes grow in California during the summer months. Same with grapes. "What happens if you want some grapes during the month of December?" says Equihua. "What are you going to do? Not eat grapes?"

Yes, it is quite a problem that local food is seasonal. That's one of the main reasons I eat local food! I like being more in touch with the seasons and what's available when--not to mention that local food eaten in season tastes a lot better. I love asparagus and would love to eat it all the time. But it tastes so much better in May and June that I am willing to hold off and just eat as much as I can during that two month period.

What happens if you want to eat grapes in December? How about you DON'T eat grapes? How hard is this? There are lots of other foods that are in season then that you could eat. Oranges, for example. Maybe we shouldn't be able to have everything that we want whenever we want it. The ability to eat grapes year round means that we don't know when grapes are in season anymore. Same with avocadoes. Nor do we really know where avocadoes come from, where they grow well, because the world is at our fingertips in the seasonless grocery store. Eating seaonally is one of the easiest ways to get in touch with nature--you don't even have to drive out to a state park or lake to do so. Just open the fridge.
Posted by Erika Janik at 8:52 AM No comments: 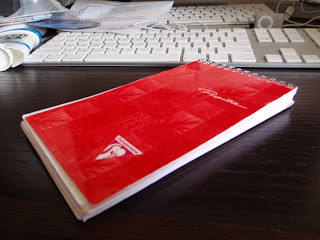 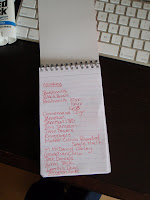 See that? That's our drinking notebook. I carry it around with me wherever I go. Inside are lists of all the bourbons, whiskeys, beers, tequilas, sakes, and vodkas we've had. Well, all that we've had since I started carrying the notebook. Or remembered to write down because sometimes I forget that I have it. That usually only happens after I've had a few. It's a pretty impressive list nonetheless.

We've made it a point to always try something new when we are out. It's easier at some places than others. I don't think we'll ever get through all of the beers at the Old Fashioned. I love that. I also love that almost all of their beers, and all the ones on tap, are from Wisconsin. Drinking locally is a taste of place that's just as important as local food.

There's also a satisfaction in knowing that you've had everything on tap in a bar, too, though the satisfaction quickly fades when you realize your drinking options are Canadian whiskeys (do Canadians not have taste buds? Or do they actually think that fiery nail polish remover tastes good? every Canadian whiskey I've ever had are varying degrees of terrible), Bud Light, and Miller High Life. No one wins with this choice.
Posted by Erika Janik at 1:23 PM No comments:

Erika Janik
Unable to ever fully settle on one career, I'm a radio producer and freelance writer, which allows me to be a little bit of everything through my work. I'm the author of the books "Apple: A Global History," "A Short History of Wisconsin," "Madison: A History of a Model City," and "Odd Wisconsin." My work has appeared in a whole host of publications with M and W in the titles, including Midwest Living, Mental Floss, Smithsonian, Madison Magazine, Wisconsin Trails, MyMidwest, the Onion, and the Wisconsin Magazine of History. Check out my work at erikajanik.net